It is not quiet when the latest gaming keyboards from Sandberg EsportsEquipment are used. The ultra-precise "Blue Outemu" switches in the keyboard provide great, tactile feedback, but also a distinctive sound for each stroke.

Perhaps that is why the keyboards are called Hailstorm.

That is how the gamers like it. Although grenades are exploding all around, buildings are collapsing and gunfire echoes through the air, the player must have complete control of his movements, and know exactly when the press of a button on the keyboard is registered.

Hailstorm is equipped with advanced LED technology, which delivers beautiful RGB colour effects. The keys can be programmed with macros, and everything can be controlled with the included software.

Hailstorm has full NKRO, which means that, in principle, you can press all the keys at the same time - and they will still be registered correctly. A strong feature for gamers.

It all sounds great - but what about the price? Erling Hoff Petersen, Sales Director at Sandberg, says: "The target group for our gaming products are not professional e-sports athletes with million dollar contracts. Instead, we want to provide really good gaming equipment for the many talented amateurs, of which there are more and more. Therefore the price of Hailstorm is very reasonable, even though it is a great gaming keyboard, and even comes with a 5-year warranty. It is made possible by a clear focus on the mass market instead of the few."

HailStorm can be found in many places, both in stores and online. You can find your closest dealer at www.sandberg.world . 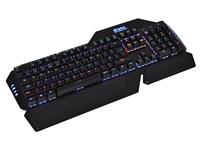